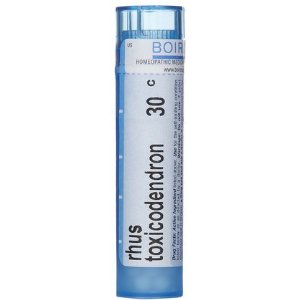 Rhus-Tox – is one of the BIG homeopathic remedies (referred to as one of the polycrests) that can be used for short term illness (and can be found in the Helios 36 First aid remedy kit) and also for the much deeper work that you would do with a qualified homeopath working at an emotional and physical level. This is a story about how it came to the rescue! Enjoy-
Superhero Rhus-Tox to the Rescue for Row Row Roisin
Roisín, or Row Row Roisín as she was known from an early age as she was always to be found in a cardboard box rowing around the kitchen using an old silver wrap tube as an oar. As she grew up her love of rowing continued and she joined the local canoeing and rowing club. This year for Christmas she got a t-shirt with Row Row Roisín on it and can be seen wearing it most days when it’s not in the wash. Anyway suffice to say……she ate and slept rowing. One day recently, she started to complain a bit about her knee being sore and she was hobbling a bit on it. Her Mum didn’t take much notice of it as it wasn’t stopping her going rowing! She watched her as she did a bit of shuffling and began doing funny walks around the kitchen trying to give it a stretch and ending up looking like Basil Fawlty.
However, when Row Row Roisín announced she would not be able to go rowing at the weekend as her knee was too sore, the alarm bells rang for her Mum immediately and she swung into listening mode and observing what was going on. Roisín began to explain the symptoms, she said “Mum it’s just really really STIFF and it’s painful but once I start moving on it the stiffness gets less and then when I stop again and rest the stiffness comes back”. She also was quite aware that Roisin was unable to sit down, she was more restless than she had seen her before, as usually she would come in and sit down and chat but she just kept on shifting into positions to get more comfortable and she decided this was a symptom that no doubt was important to note when trying to decide the remedy. She got out her first aid homeopathic kit packed with Superheroes ready and waiting to serve her family and she looked at 2 key remedies Ruta and Rhus-Tox that she knew were related to tendons, joint and ligament damage. She recalled that one was specifically for stiffness that was better for movement. She looked up her book and found that Rhus-Tox was all about stiffness that was better for movement and also it talked about this restlessness that she had noticed in Rosin. She reckoned if she chose Rhus-Tox she was onto a winner. She took the remedy out of the box and said casually to Roisín – “let’s take one of these and see how you go”. As soon as Row Row Roisín took the remedy the stiffness disappeared. Her Mum and herself waited and said nothing, waiting for it to come back but there was no sign, they waited some more and her Mum thought , “ok it has worked but she will need another soon”. She didn’t, one little pill of Rhus-Tox was enough for her. Her Mum rang me immediately to tell me of their Superheroes visit. She had to share it as she still could not believe that this tiny pill, from her Superhero box, had literally saved Row Row Roisín’s day – and the next day Roisín went off rowing, the stiffness completely forgotten.